Delphine Cherry’s philosophy is to always believe in yourself, your dreams, and strive to make a difference in the lives of others through knowledge, wisdom, and positive guidance. Despite of the loss of her two children, twenty years apart, to gun violence she continues to strive to stop violence and help others find their divine purpose in life. Delphine is an advocate for many important social and political causes. She is the founder of the TY Foundation (Tender Youth); formed after the murder of her son Tyler Randolph. The foundation provides support, resources for family members and loved ones for the communities that are impacted by gun violence in our communities. Delphine is an activist for peace and is on the forefront of the movement to find solutions to America’s gun violence crisis. Delphine has been a resident of Hazel Crest for sixteen years; she grew up on the south side of Chicago and is the youngest of four. Delphine inherited her mother’s giving spirit.

Delphine comes to this movement from a place of pain and contributes a unique perspective; the deaths of her two children has shown her just how much the anger and violence of others, mixed with access of guns can destroy the lives of so many people. She first experienced this when she lost her daughter, Tyesa. As Tyesa was coming out of a movie theater on January 17, 1992, she was struck in the head by a random bullet fired by a 14-year-old who was fighting with another youth while waiting in line. The second time she experienced this horrible violence was with the loss of her son Tyler. Tyler was the youngest of Delphine’s four children, she called him “My Sunshine.” On a winter day just three days before Christmas of 2012 Tyler was brutally beaten and shot in front of Delphine’s home. Tyler was twenty years old and his murder is still unsolved.

Delphine fight for justice began in 2013 to because she wanted to stop others from feeling the pain she feels every day because of the lost of her two beloved children. Instead of allowing her grief to defeat her, she began to fight back through becoming an activist: she founded the TY (Tender Youth) Foundation named for her son, later that same year she became the Co-Chair for the Brady Campaign Chicago Chapter, started volunteering for the Illinois Council against Handgun Violence and a year later became a Youth Commissioner for the Village of Hazel Crest. She believes that she can no longer just sit back and be a victim or a bystander; she has to do more to stop gun violence. Through working with the the Brady Campaign, Delphine has built an alliance of gun violence prevention activists in Illinois. She wants to stop more parents from having this terrible tragedy happen to them. People often ask her, “What drives her to want to do this work?” Her response is because she is a mother of four and two of her children both were victims due to gun violence. Neither of her children will never have the opportunity to attend their college graduations, able to get married, or to have a family of their own. Both of her children’s lives were robbed short because both of the individuals who shot her children had easy access to illegal guns. No parent, friend, lover or family member should have to feel preventable pain. As of today Delphine’s son’s murderer has not been apprehended. Delphine knows that the person that murdered her son is still free and dangerous with an illegal gun.

The boy who shot her daughter, Tyesa, over 23 years ago was only 14 years old. All of this motivates her to want to lead the fight to stop this violence.

Delphine joined the Brady Campaign in 2013. The Brady campaign has empowered her to tell her story and explain to people how gun violence destroys lives and communities. Delphine has also taught many people about the Brady Campaign’s solutions to stop gun violence. Through her time with Brady, Delphine has learned how to be a better gun violence prevention activist and has brought many other people into the movement to stop gun violence. Brady has also given delphine a platform to have her voice heard through lobbying in Washington D.C. meeting and speaking with Hillary Clinton, and holding one on one meetings Senator Richard J. Durbin, Senator Tammy Duckworth, Representative Robin Kelly, Gabby Gifford, and Representative Danny Davis. She has also met with many Illinois legislators about gun violence prevention legislation championed by the Brady Campaign.

Delphine has been a leader of the Chicago Brady Campaign chapter for almost five years. She takes that roll very seriously and believes that the Brady Campaign is an important voice in the fight to stop gun violence. Over her time with Brady Delphine has helped organize many rallies, protests, lobbying days and other events. She has also recruited and connected with volunteers across Chicago, the State of Illinois and the Country.

Faces Not Forgotten: Delphine worked closely with Christina Illewski of St. Louis Faces Not Forgotten Chicago project, Christina an Artist painted portraits of her children who were killed to gun violence and donates these portraits to the victim’s family; putting a face to those victims first exhibited in Chicago was April 2016

Education: Delphine is a graduate of Dunbar Vocational High School (1975). She is an Alumni of Governor State University where she received her B.A. in Criminal Justice. While attending Governor State, she received numerous academic awards such as the Ralph Turner Scholarship and was invited into the Who’s Who for her outstanding achievements.

Membership: National Association of Professional Woman, Thrivent Financial Member Volunteer Activity: Chair of Hazel Crest Youth Commission: Delphine passion was always for the youth it was her way of giving back to the community Mayor of Hazel Crest Event Planner Committee: Board Member for Highland Civic Association Home Owner: Delphine looking for ways to keep her community safe

Employment: Delphine worked as a probation officer for Cook County Circuit Court. Working as a probation officer was rewarding, it fulfilled one of her dreams by allowing her work side by side with court officials, attorneys, and judges to seek justice. Delphine prides herself on her professional judgment in dealing with sensitive and confidential matters. She works well under pressure, she possesses strong professional observation, oral and written communication.

Back to Team Members 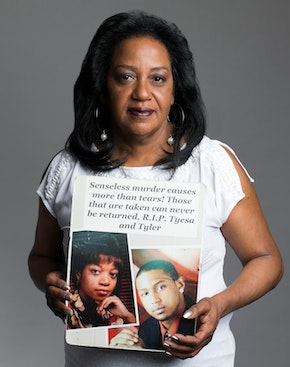